cleaning up a the last few bits of welding on Roy's Ti X frame before heading to the paint booth...been a fun project with both Bill and I working on this one from design to the final paint. 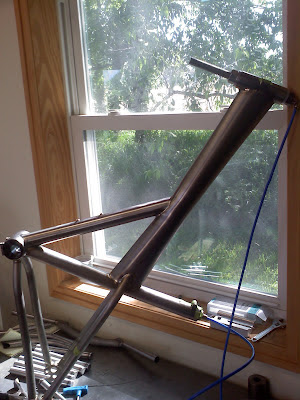 Working with a good friend, on a bike destined for a customer who has become a good friend...the circle of life that makes it worth living  :)

a tight design that incorporates a short wheelbase, low standover, and 2.5" 29er wheels in a sexy package... 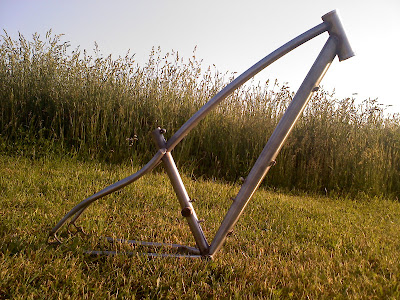 The small front triangle and short wheelbase required a segmented stay rear end to get the clearance we needed as almost 60 degree bends in a 2" space were not gonna happen. 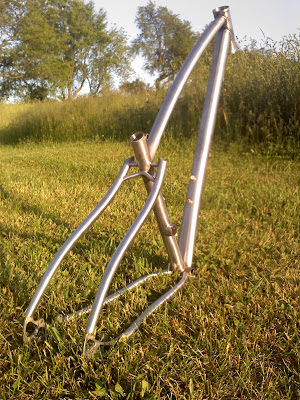 She'll be shot in a midnight metallic blue and white pearl, should be stunning.

Pics for Keith to enjoy as we work on his raffle winning frame... 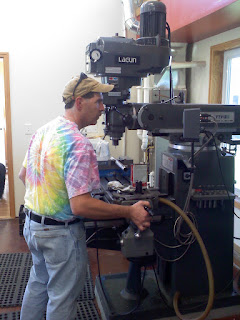 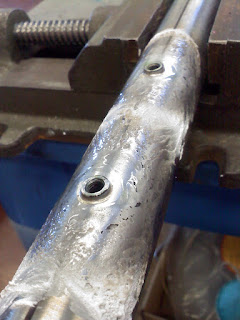 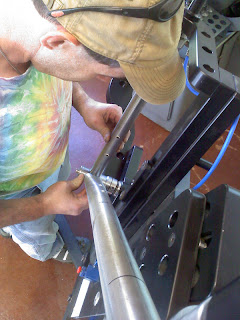 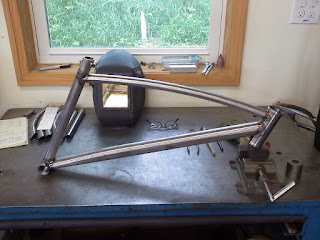 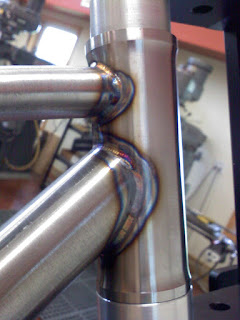 Pushing through this frame and some bars while I wait for a package to arrive from Paragon with some ti goodness to complete the changes to Martin's design.  Liking the 44 headtube, does not look too large when mated to my standard downtubes and provides plenty of room for internal cable routing around the steerer for integrated Rohloff builds.  I was hoping for a positive experience before launching into Martin's Ti headtube, and this build provided some positive affirmation.

Grabbing some sleep now then back to the FD for a push.

See y'all in a few days,

A big thank you goes out to all our mountain bike family for participating in the opening Groovy race of the 331 Power Series.

I can't begin to share all the goodness that transpired, it has to be experienced to be believed!  There are so many good folks involved in our sport, I feel blessed to be part of it.

Friday began with final course prep and setting up the Start/Finish and awards area.  Mike C and I were busy hanging banners, organising, and racing to beat the impending scattered thunder showers.  We were fortunate that Phil, a mountain bike enthusiast travelling from Durango to New Hampshire had stopped in to ride and voluntarily threw himself into the fray to assist with preparations.  Phil was so taken with the Knob and our mission there that he hunkered down and stayed the night, returning to race with us the next day.  A great guy that epitomises the folks that me driving forward in this game.

Saturday morning dawned clear and dry, with dust filling the air as I cruised down the Knob drive at 0530 after a final check on preparations.  Off to the FD I went as I had to work til noon before heading to the race.

By race time, the sun was in full force and we had a tremendous turnout; from our first kids race of the year to the cross county event, everyone was equipped with a smile and enthusiasm.  We had over 25 kids take part in the kids race, with distances varying from a drag race for the little guys to the final third of the xc course for the older kids.  Medals, prizes and applause met their efforts.

The cross country race contained 148 racers, from old vets of the course to first timers.  The mild winter was evident in the fitness of the riders, as we had blistering fast lap times for the first race of the year, with the fastest being thrown down by Expert Stevie Twining at 30:40 for the near 7 mile course.
Impressive as that was, I was moved more by the first time racers, many of whom were pushing their limits like never before.  The desire to excel and push themselves was inspiring, regardless of the final time logged.  We had racers from afar join us...Phil from Durango, Mike from Chicago, and pictured below, Andy from To-Le-Do, a little known city from the far north west...

I also want to give a shout out to our many racers who took our call to move up in class to heart, as your willingness to further challenge yourself opened up opportunities for those in the lower classes to taste personal and podium success.  You know who you are and I'm proud of ya  :)

Following the XC race, we had our annual WooTown Single Speed Challenge; a just for fun race 3 times around the kids course, interspersed with amusing challenges.  This year, we had 20 bold participants, from age 8 to 50+...fun knows no age boundaries!  Our racers began by forming a circle, taking off their shoes and tossing them into a pile in the middle.  They were then spun for 20 seconds with their eyes closed before being released to find their shoes and run to their bikes... 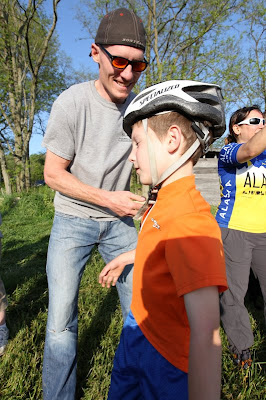 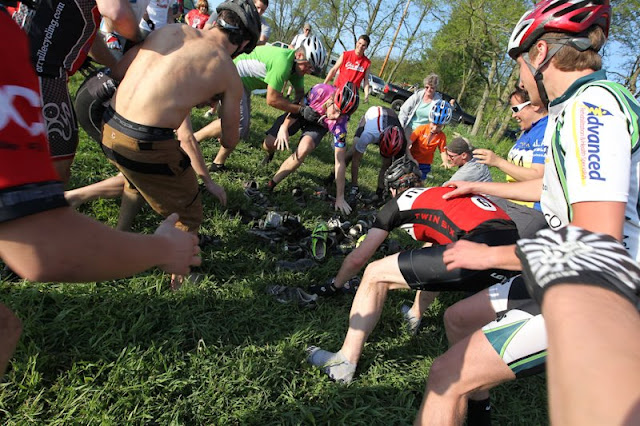 Once equipped with shoes and wheels, it was a dash around the kids course and through the water hazard, an area where 15 kids armed with squirt guns mercilessly shot our contestants as they rode past.  Then it was into the pits for the first challenge...consume 6 Saltine crackers and a spoonful of peanut butter sans drink.  Not an easy task, just ask Jarod... 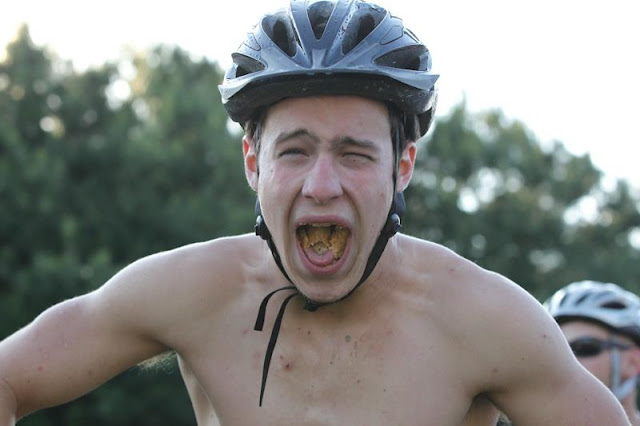 Back on the bikes, the racers completed a second lap, then came into the pits for a Sponsor Challenge, brought to you by Chamois Butter.  Each racer was given a small cup full of Chamois Butter and a dash of Japanese hot sauce to liberally apply to their bodies.  Where they put it was up to them, but let's just say the crowd was quite vocal, both in encouragement and dismay, by the location chosen by our participants, as evidenced here by Kalten... 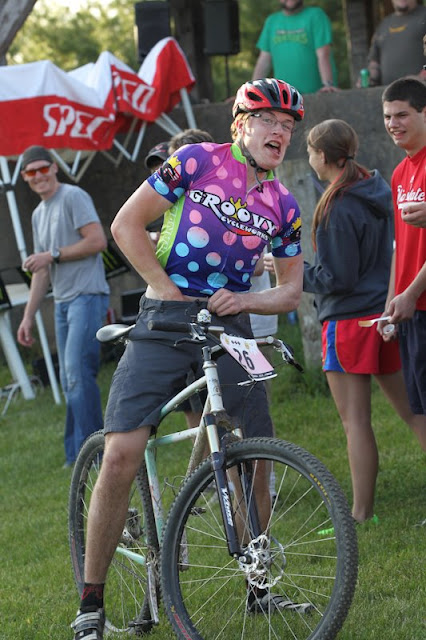 A final lap ensued, mouths dry and crotches afire, with the riders finishing over the 6' log obstacle adjacent to the end of the course.  Last years winner, Michael Gottfried, so consumed by the physical and mental toll of the race, fell off twice before pushing forward and completing the obstacle...that's tough love!

Our winner, Zac Carmel, showed the dedication and sacrifice it takes to hold the Bad Ass MOFO trophy for the year, then it was QUICKLY off to the showers... 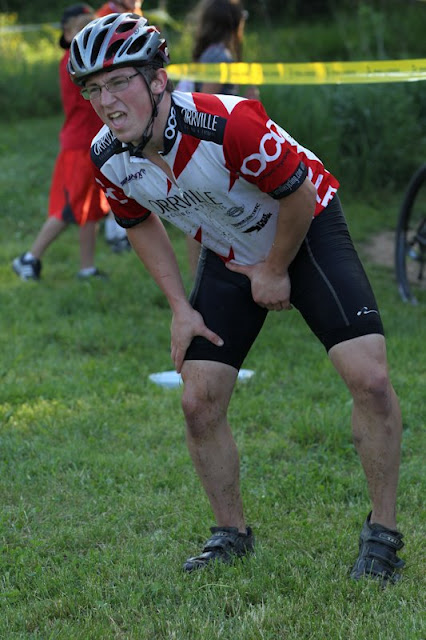 A stunning bonfire, ripping tunes by DJ K Wally, and socialising with friends made it a perfect ending to the day.

Unfortunately for me, I had to go back to work at the FD at midnight, then stayed for another 36 hours due to manpower shortages, finally arriving home late Monday night.  Pretty much wasted yesterday doing some office work and resting up.

Thanks to Greg Breke and All Mountain Imaging for the photos that tell the story.

It's time to slap a smile on yer face, some dirt in yer shorts, and come out and support public access to mountain biking by racing in the Ohio Power Series.  Our first race will be at Vulture's Knob tomorrow, with a whole spectrum of fun and silly sideshow amusements.  Remember, your participation does more than just provide you a competitive outlet...proceeds from 331 races pay to keep access to our local trails open, provides for our "Bikes for Kids" program, and helps fund our youth cycling enrichment work.

Whether you race or not, I hope to see y'all there...

Stage #1 of the expanded Ohio Power Series is sure to delight. The historic Vulture's Knob mountain bike course has undergone a transformation over the last 4 years and continues to mix the zany with the traditional with a little flow getting thrown down. To highlight this triumphant time of year and the beginning of the race season, Dr. Knob is calling on all racers past and present and is throwing down the traditional Easter Egg reunion bash; you know...find that special egg during the XC race and you may go down in history by drinking the drink...if you dare! There are colored eggs, numbered eggs, cooked eggs and a raw egg! Find one during the race, bring it back uncracked to the awards ceremony and...well...you'll see what we have in store for you!

WOO TOWN SINGLE SPEED CLASSIC BONUS RACE | TBDish
Immediately following the Groovy Cycleworks cross country race we will be holding a fun filled, action packed, zany single speed short track bonus mountain bike race. (free) This event showcases the simplicity and purity of rock'n the single cog! But can you handle the twist and turns the mighty Vulture's Knob might, will, or for sure throw your way. If you don't have a SS, no worries...we'll tape your shifters and you'll be good to go!

The annual VKnob Woo Town Single Speed Champion will be crowned at the closing ceremony/party and will hold this distinguished award for 1 year, but will be remembered forever. Up for grabs... the annual Big MoFo Trophy, your name laser cut into a piece of stainless and tacked on from year to year. - so you don't want to give it back...you must return the next year to defend your title or lose the Big Mofo revolving Trophy to a new champion.

RECOVERY PARTY at sundown the traditional bonfire will be lit and as the moon raises over Vulture's Knob DJ KWally will spin the rare funk and eklectik beats til the sun rises over the horizon.

The ship is sinking...

Website and email are down for an undetermined amount of time thanks to Microsoft...working on getting it back but it is proving to be incredibly frustrating.

Thanks for your patience...