It often seems like my life is a battle for time.

Besides running both full time jobs, I've also been playing political activist to fight Issue 2 here in Ohio by working the phone bank (swore I'd never, ever do that since I hate being called at home), going door to door, and speaking at a rally downtown...a small contribution compared to some of my devoted co-workers.  But my latest inability to say no/do too much was my decision to take on an 8 week college class dealing with management...my saving grace to be that it could be done online at my leisure.  Funny how time cruises by, because I realized Thursday that I only had until Saturday night to complete all the assignments, read 400 pages and take the online final exam...shit!

So, if y'all have called, txt'd, or emailed in the last three days and have not heard back from me, it's because I've been desperately/furiously/single mindedly working to finish my college course obligation.

Good news...emailed the last assignment and passed my final with a 98% just moments ago.

Bad news...the next quarter/part 2 of the class starts Monday;  Ughh.

This next go around, I'm gonna leave at least twice the time to get it done :)

Hope all is well,

Making Progress...Hot Rods in the Haus!

It's been a bit of a nightmare getting the outside vendors firing on all cylinders (long delay at heat treatment, 2 times through plating to get right build thickness) but the cranks have finally made their way back home.

Post heat treatment/plating machining is completed, ready to start putting on the final finish for each set.  Still have some spiders to come back from anno but we're getting closer :) 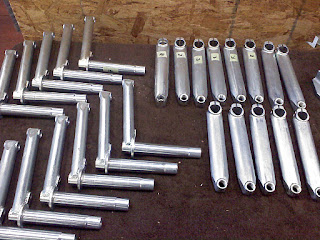 These have been a LOT of work to get all the final kinks worked out, but will totally be worth it.

Wow, what a fantastic weekend of fun, fellowship, and of course...racing!

The two day extravaganza was a whirl of activity that I'm just now stopping my head from spinning like a crazed mad scientist project  So, just a few highlights to bring y'all up to speed if you were not blessed enough to join us.

There have been a core group of folks that have embraced the "cradle to the grave" theory of getting families out and enjoying the opportunities that cycling offers.  Besides the kids race series at the Knob and Manatoc, we've spearheaded a weekly kids skills clinic, masterfully run by the Miranda family, that introduces new riders to the sport and builds self confidence as well as bike handling abilities.  331 has also been diligently working towards establishing a high school league in our area and are looking to next fall for it's launch (some final paperwork to wade through yet).

Saturday, the final kids race took place at the series finale, with an outstanding turnout.  Each of our little ones raced one lap around the kids course, and were able to take home a medal, a custom Groovy/Vulture's Knob jersey, Halloween toys, a free Bell helmet, and a chocolate coated pumpkin cupcake ball on a stick...yummy.  It was like Christmas in October! 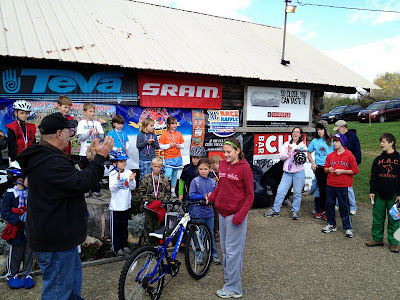 In addition to the race, Bikes for Kids spokesman Larry Clouse gave away our final bike for the year to an under privileged child who would otherwise not be able to participate in our sport.  A big thanks to each of our racers, as a portion of your entry fee goes to the bike donation, as well as the Edge Outdoors for assisting with this program.  Over the past 2 seasons, we've been able to give away 20 bikes and helmets with your support...thank you so much.

The cross country race was a stellar showdown on many fronts;  Steve needed to have a strong showing to take the series award as he lost points by dabbling in a cross race instead of suffering for 6 hours at Westbranch (can't say I blame him), Carey was in a three way race for second overall with Tom F and Jeff C and needed a win to clinch the points, and Kalten, who raced from his OCC cross country championships (where he ran a personal best of 17:52 over a hilly course) needed to finish strong against all those dérailleur guys to clinch a top three in the series podium.


Needless to say, the Groovy racers all performed flawlessly.  Steve literally rode away from the rest of the under 35 expert field like he was having tea and muffins on a Saturday afternoon with his Nana...he looked fresher at the end of three laps than I did at the start. 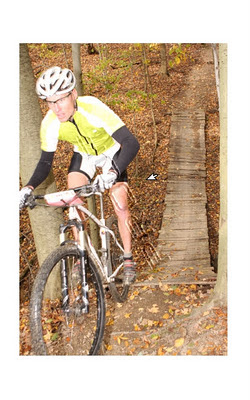 Carey took off like a bullet, doing his darndest to keep the wily Mr. Clarke in his view, riding at a pace that was steadily at the red line.  Having that carrot out in front must have helped, because Carey zoomed across the line, clinching second in the series...nice job Wang Pig! 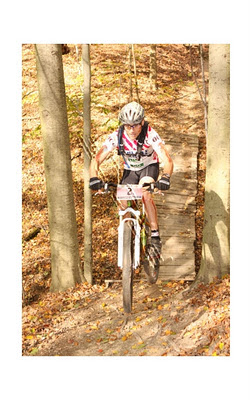 I thought fo' sho' that Kalten would be whooped from his early morning Cross Country race, but with a one bike length head start (thanks to his pop tart costume), he was able to lead the first lap until he dabbed in a tight rooty section and then ran on Blodgett's heels the rest of the way, securing second not only in the day's race, but for the series overall.

Nicely done to all involved. 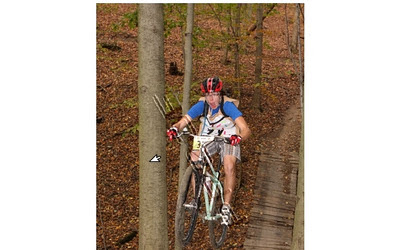 The evening was spent wiling away the hours in front of the bon fire to the melodic tunes of DJ Madnote (while cleaning up) and getting ready to do it all over again Sunday morning for the Down Hill event.

but here are the results...


Logan, of LR Photography was out both days snapping amazing shots of all the riders.  They are available for purchase, with a majority of the profits being donated back to Vulture's Knob...thanks Logan!  You can check out the DH gallery here

From Kevin, Mike, Dusty, Jay, and myself, we truly am blessed to have such a grand cycling family...thanks so much to all for supporting us in 2011.  See y'all next year.