Have not had anything too informative that has not been covered in this blog in the past, but had Paul's Space Bike come in with a broken seatpost, the end stuck fast in the frame.  That makes riding difficult if not down right uncomfortable.

You need two distinct forces to remove a stuck stub of post; mechanical and temperature.

I've never met a stuck post I could not remove yet, so though I don't relish these fixes, they are strangely alluring in their challenge.

Here was a walk down memory lane for a stuck Thomson...

This ti post gave up the fight pretty easy though.

First thing I did was look to gaining some mechanical force.  Trying to grab the stub with a pipe wrench or other "crimping" style tool will only ovalize the tube and create pressure on the inside of the seat tube, increasing the difficulty of removal.  So I drilled a through hole in the remaining material that allowed the passage of a 5mm allen tool that I would then use as a lever to turn and lift with. 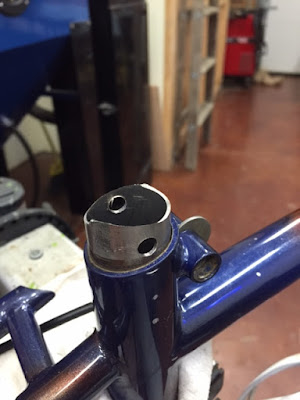 Next, I applied heat to the inside of the post in it's full diameter; enough to create some expansion of the seat tube and loosen the potential corrosion, but not enough to affect the paint. 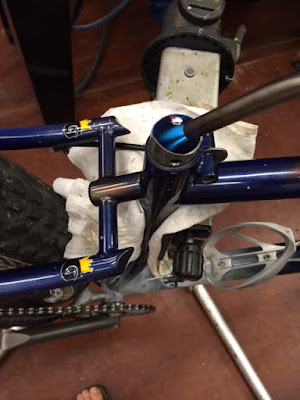 Then it was a simple twist and pull with a few choice words when I cut my finger on the ragged edge of the broken post. 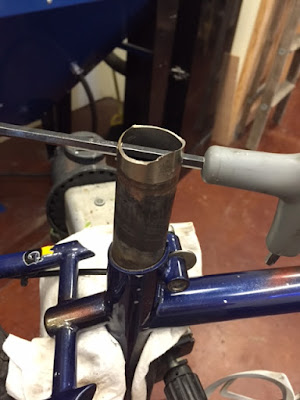 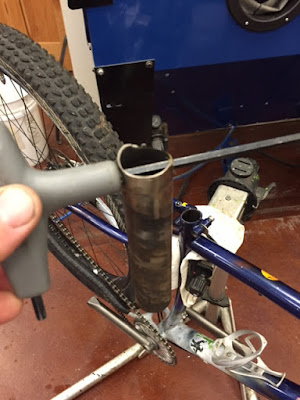 Inspection of the post showed that there was a distinct discoloration inside the wall of the tube about 1/8" long, possibly a defect during the drawing of the material.  Who knows, just glad that Paul is Okie Dokie and that the bike will now be on the trail again soon.