Framebuilding today...is it really possible to make a living?

I don't typically have a lot of time to peruse the Velociped Salon forums, as I spread my computer time emailing with customers and e-marketing; updating my "smoked out" thread, my blog, and the business facebook.

The last two days, while taking a quick break for lunch, I've been reading a thread over in the VS general column about the current state of frame building and the economy. Looky here... Small Builders taking a hit

Of course, now that I wanted to contribute to the discourse, it is locked. So here it goes...

Although the thread takes a few branches as it climbs up the tree, there were two thoughts that piqued my interest.

The first is why some builders no longer contribute to the knowledge base and the second, what is a sustainable business model?

I felt the first was well covered...time constraints of "life" balanced with the fact that a fundamental bank of information already contributed and existing on myriad of fabrication subjects is readily available with a little searching throughout the forums. An element missing in the discussion, however, is the sentiment by many builders that there is such a wash of misinformation spread across the interwebs, accepted as absolute truth, when they do attempt to provide solid guidance based on their personal years of professional fabrication experience, they are challenged or attacked for their differing perspective. When trying to offer honest assistance with no other impetus but to advance the knowledge and opportunity for someone who desires the information, these builders soon find that if their information is not valued, why waste their time?

It's a shame so many have chosen not to contribute due to this fact...how are we to right the ship if we cannot get everyone paddling together?

The second issue...what is a sustainable business model?

Richard commented and was affirmed in his perspective by Steve...

"I think the one-at-a-time, each-one-different, each-client-different-from-the-last, never-do-the-same-thing-twice business model is a major league, varsity sport level stress-a-thon and one totally counter to allowing a profit that would allow for a sustainable living wage atmo."

It is a perspective that is echoed by many of todays successful builders and is one that, ironically, is totally opposite of mine.

I do one at a time, each one different, each client differnt from the last, never do the same thing twice, control the entire process, complete all the fabrication in house, day in and day out business. That's one of the reasons my customer base comes to me...because no one else does. Within the framebuilding world are plenty of niches...mine is totally unique projects, personalized for each individual customer, with as much made by my hands as possible. A project may take anywhere from 40 hours to over 6 months to complete dependant on it's complexity. Yes it is stressful, yes it takes more time, and yes...the fulfillment and rewards are greater than just sending out a standard frame with custom geometry.

So how is this sustainable?

Charge what you work is worth darling.

I may only complete 10 - 12 projects a year, but those come at a price that provides a level of income necessary to keep the doors open (or closed with air conditioning on!), upgrade equipment and tooling yearly, and provide food and clothes for the family, for which I am the sole income earner.

Want to know what the secrete is to surviving in the bicycle fabrication business?

- Do good work: never let an item out the door you are not satisfied you gave your best
- Communicate and be honest: through good and bad, open communication and honesty should be a foundation of your business model
- Treat your customers with respect:
- Charge what your work is worth, not what you need to survive: if you've done the previous three, your customers will gladly compensate you.

It's important to keep our past alive, so as a knod to those who have come before me in the bicycle fabrication world, I do some gratis work for Jeff and Wes of First Flight Bicycles and their Museum of Mountain Bike Art and Technology (MOMBAT). This is a pure restoration of an early 80's garage build frame. The original builder is unknown, the only clue being the serial # added to the bottem bracket: "CUNT".   At at least two other hands before me have worked on this frame due to the physical evidence present. 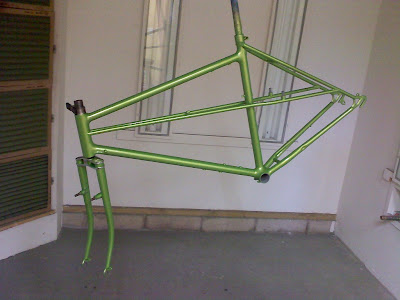 I kept the evolution of the frame intact, repairing only what was necessary and repainted it in a nice 1982 Lime Green Poly metallic. 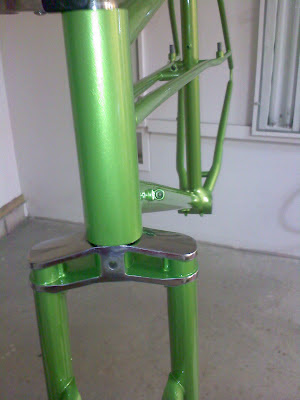 It will live on in the museum as a piece of work that contributed to the designs we ride today. 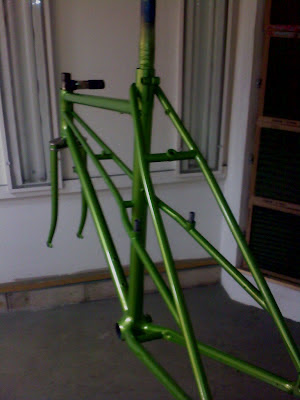 Thanks Jeff and Wes for keeping our past alive and each of us rooted.
Posted by Rody at 7:38 AM 1 comment:

One of the aspects of frame building/fabrication that most folks do not recognize is  the solitary time in the shop, void of human interaction for long hours.  It is a process that demands focus and concentration, interacting with cold, simple tools devoid of emotion.  The only feedback you receive is the sound of the cutters and files moving through metal, palpable vibrations fed back to your hands, and visual affirmation that you are shaping and changing an inanimate material into a tool that will allow another to achieve an emotional state far removed from where you are now.

Being a fairly animated people person, it is a process I sometimes struggle with.  One shop task epitomizes the bottom of the enjoyment curve for me...fabricating Luv handle bar centers.  It is a day that comes once a month.  It is a day that I dread, often putting it off in place of more desirable shop duties, but alas, the unfortunate truth to being a responsible adult is that we often have to do things we don't always enjoy.

So yesterday I put my head down, built my resolve, and forged ahead.  14 lonely hours later, here is the fruits of my labor... 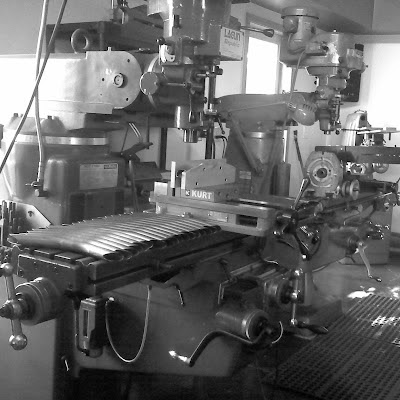 32 steel and ti centers line the 52" mill bed for this months orders.

The bending and swaging are fun and move quickly, but once the mitering begins, the day slows to a crawl.  The compound miter between the center of the bar and the grip section is a long, nasty cut, requiring patience and multiple passes to complete.  Four bars an hour is the completion rate once at the mill, slowly watching and feeding the cutter through a narrow channel in the fixturing.

Knowing that the toil allows me to imagine and then bring to fruition a construct that allows us mere humans to elevate ourselves into an experience otherwise unreachable makes it worth it.  There is just something about the wind whistling past your face, the hum of tires on the trail, and reaching speeds our bodies are physically incapable of without a bicycle that transcends the pain of this solitude.  I guess it's that thought keeping me company in the shop while working alone.  Conversely, each time you ride one of my products, a little of me goes with you too.


Every story needs a final chapter.

Each day I walked through the shop and passed the shattered remnants of the X, I felt sad.  Sad that Roy had only the opportunity to enjoy the bike for a week, sad that the frame met it's demise in such a dramatic fashion, and sad that all the work that went into the frame from both Bill and I was for naught, save a few precious memories.

Fortunately for Roy, the stars aligned and unbelievably, he found another Groovy to call his own.


Jay R, who had commissioned a beautiful custom bike to inspire him to begin cycling again in the mountainous dirt roads of Tennessee, had abandoned the fully rigid/Rohloff designed frame after a number of years of solid use.  He has been lured into the dark world of all mountain down hill riding and the squishy rides that dominate that niche.  Rather than see it sit unridden, he wanted to find it a new home to be appreciated...bullseye, mission accomplished!

Emailing with Roy about his new purchase, he inquired as to the fate of the X.  After a thorough looksy, it was obvious that the frame would never be repairable without a LOT of work, and even if it was possible, it would not be suitable to be ridden by a customer again...a prospect that sent my lovely insurance agent into a tizzy.  Roy and I agreed, and the issue was laid to rest.  The remnants of the frame went into the scrap bin.

I swear I didn't move it, but the next day when I opened the door to the shop, the X parts were no longer in the scrap bin, but laid out on the floor by the lathe.  "What the heck????  How did those get there?"

Hours later, working at the lathe on some bars, I my gaze lowered and the doggies were laying on the floor at my feet, the X situated between them.  All three looked up with adoring puppy dog eyes... I heard a whimper, "fix me".

Easily explained, such delusional apparitions are common with sleep deprivation, and I've no shortage of that of late.

A few days passed, stepping around and over the tattered pieces, I just could not toss it back in the bin.  The frame wound up on the work bench;  What would it really take to sew it back together and make it strong enough for use?

The next week, it was back in the fixture, couldn't hurt just to look, eh?

July 4th, birthday of our nation.  A day to celebrate a new beginning.  Adventurous spirit, fighting adversity and all that jazz.  Damn it, I gotta try.

- vigorously strip and clean the frame inside and out
- hours to finesse/manipulate/persuade the tubes back to round
- clean the tubes more
- created a 5 inch long butted, press fit insert that supported the main beam generously on each side of the fracture, tapering on the ends to distribute stresses evenly to the original tube
- clean again and purge
- circumfrentially bullet welded in place every 10 degrees on both ends of the insert
- alignment check
- root and overlay passes on the fracture line
-alignment check
- a little one on one time with the Dotco to smooth it all out
- Finally, a 225 pound dynamic weight drop test on head tube axis...who'da thunk, it survived straight as an arrow.

Now what?  Given all the frame had been through, it's repair and subsequent rebirth, I could think of no greater finish for it than that of Mary Shelley's Frankenstein, but with a campy, fun twist.  So into the paint booth I went, and out came this...


A broken F29 fork was rebuilt and repurposed, painted to match...

Had to put this on it...
The X will live out it's days under my fat ass and less demanding riding style (if you can call it style) with a smirk on Frank's face and a smile on mine.

See, most stories have a happy ending if you are willing to work at it hard enough.

The press failure, some power outages due to storms and a 120 hours at the FD this week have delayed the Ti Luv production...but no longer!

Working on these today so I wanted to update y'all.  Thanks for your patience  :) 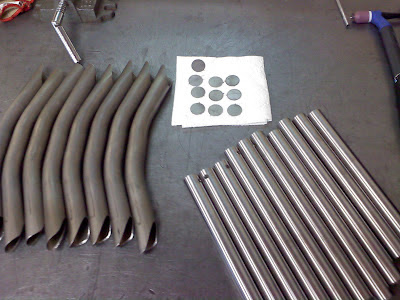