Back to rocking forward...

Sooooo happy to have the shop functional again, I decided to get to work and do something simple to begin break in the new space.

With the paint booth finally ready, I wanted to get moving on Roy and Don's paint as they've been beyond humanly patient.  Into the blaster go the parts, the compressor chugs to a rythmic beat, and I press the pedal to flow some media...phhhht!  Hmmm, that's not right.  Phhhht.  Nope, not right at all.

Now the blaster has been less than stellar the last couple of months, but I figured some of it was attributed to this... 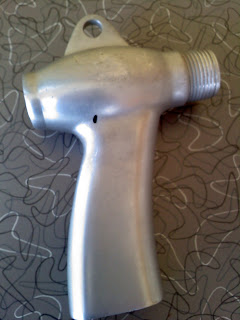 Time and abrasives had burrowed a hole through the side of my gun, allowing air pressure and media to spew out the handle instead of the nozzle.  True to form, always a bit short on time, I've just been folding up some aluminum foil and duct taping it tightly over the hole to get by...yeah, I know, ghetto.  Today's issues seemed to be a little bit more serious though, as I was getting nada for flow.

A little more investigation showed me why... 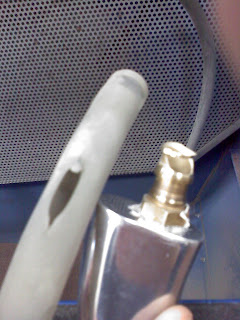 The siphon tube had a huge hole worn through it and the gun barb on the other end was equally eaten away.  Gonna have to run to Bad Boy Blasters in Canton to pick up some new parts.

Stymied with my paint prep, I turned my energies to something else.

I set to mitering, turning and welding together some bars to take along to Nahbs in Austin.  The bars are an integral part of my show, as it is a product that lends it's self to strong after market appeal and yields a fair bit of sales, effectively paying for my attendance costs.  Without the sales of bars, posts, and tee's, I don't know if I could justify the cost of attendance even though I feel very strongly that I must be there to support the growth and progression of the independent hand built bicycle. 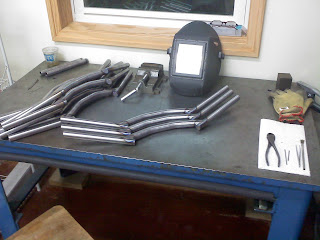 I was able to get quite a few steelies done and began prepping for Ti's next, hopefully welding those up on Wednesday if we still have power during the "BIG ICE STORM" the national weather service is projecting.  To be honest, the loss of electricity right now has me very nervous, as I only have 16 build days before the show to get 4 bikes, 22 bars, 10 seatposts, a few cranks, and me ready...ughh.

Say a prayer if ya will, it's gonna be a rough ride

Just a quick note, no fancy diatribe or pictures, to let y'all know that I finished up the last of the shop last night.

A push on the paint booth saw all the glass cut and installed with vapor proof gaskets, a new paint fixture fabricated and installed on the ceiling, and a pesky ballast that has been causing me issues replaced.  Finally all ready to move forward...whew.

Today I'll clean up and organize and start contacting customers and scheduling work to begin catching up.

It's been a long haul to get to this point, thanks for being patient.

I spent yesterday placing the re-purposed cabinets for the paint prep room and building the counter tops, one of the last items to get the shop fully functional.  The process took way longer than anticipated, a recurring theme, but I'm pretty happy with the work area I'll now have.

It's a three level station; the left counter top and cabinet will hold the masking plotter and all the vinyls, weeding tools, and decals, the center desk will be for the laptop and design work, and the right cabinet for paint supplies. 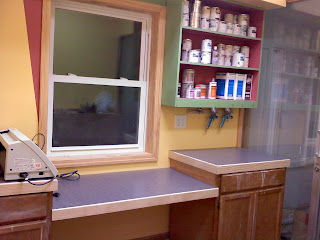 I also got the bake box rebuilt to a smaller size to fit the room, only one frame, fork, and a few bars at a time now.  The frame racks are painted and hung, and all the plumbing for the airlines are in.  Here's a shot of the paint prep area from inside the booth... 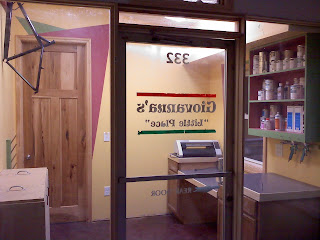 Just have to place the sealed glass over the light boxes and build a new frame hanger for the taller/slanted ceiling and I'm finally ready to begin building again...thank goodness.

Groovy and Engin...brothers from different mothers?

The Nahbs press excitement is beginning...here Drew and I had an opportunity to chat with Chris of Mountain Bike Magazine for a little insight into the handbuilt niche.

See all the hype here...


Hope to see y'all in Austin,

What to do with all those Thomson bags?

It's a questions that plagues every builder who has the opportunity to use these excellent US products...what do you do with all the nice fabric bags they come in once the component is installed.

I've got them all over the shop; each reamer has it's own, the Rigid Benders for racks each have them, etc.

Despite my storage uses, I still had a box of bags left over during the move.  As I was sending it to the bin, Kalten rescued them and pressed Christi into service re-purposing them.  Thank goodness she has talents I don't, as she was able to create some pretty cool items from my cast offs... 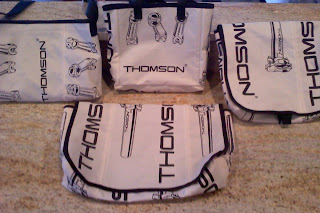 She meticuously ripped every seam, sewed them back together as fabric, and then mated them with heavy weight Duck canvass and piping to arrive at these functional courier bags and totes.  Featuring internal pockets and wide straps for comfort (still waiting for the courier bag hardware), they should serve out another lifetime now.

Nothing makes me smile like seeing pics from customers who are happy with their Groovy products.

Thanks to Joel and Jared for sharing the love...

Joel picked up the "Fat Tire" segmented fork from the clearance sale for his Black Cat frame, Fat Tire to come soon 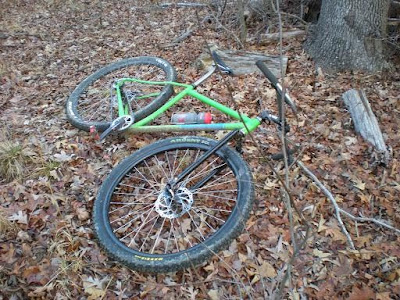 and Jared's Ti Luv for his Pugsley...should have some fun Fat Bike adventures :) 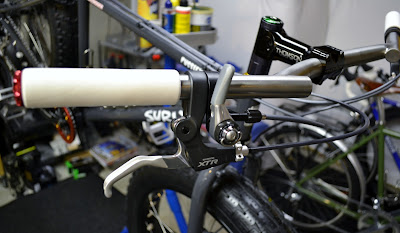 First work out of the new shop...

Busy week going on.  I'm spending the morning/early afternoon teaching Advanced Cardiac Life Support and the afternoon/evenings working on getting the new shop into shape.

Despite still having boxes filling the space, I need to keep driving forward on work, so I pushed out a few pieces yesterday. 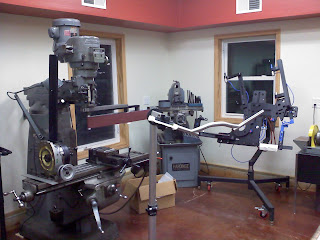 Michaels Box Crown fork with rollercam bosses all painted up and ready to ship... 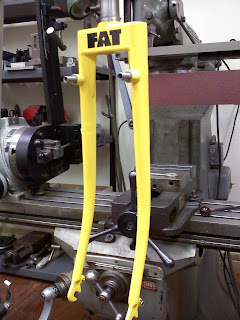 The last item on the adgenda for the evening was a little dental work.  Kalten needed a tooth pulled before his orthodontist appointment today, so with no time in our schedules for a dentist appointment, we took on the task.  How hard can it be, right? 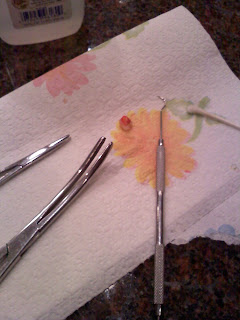 In short, the move was exhaustive, but done.  Took about 5 days of constant hauling.  Thanks so much to Stan, Adam, Carey, Hoss, Mikey and Kalten for pitching in. 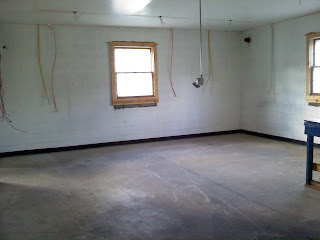 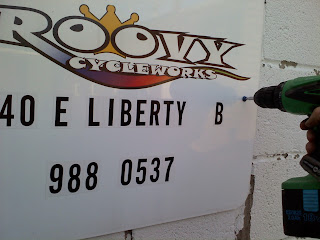 Sorting and hooking up equipment in the new space now, I will be back into producing work next week in the new shop.

Personal note to Carl... plan on twice as much down time as you think you'll need and an extra large dumpster, it's hard to believe how much stuff accumulates in this biz.  Seriously, how many 5 speed Regina freewheels does one guy need anyway?  :)
Posted by Rody at 10:13 AM 1 comment: