Thanks to Thomas for the local press...

Walter spends his free time fabricating custom bike frames as the owner of Wooster-based Groovy Cycleworks, which he started in 1994. He said he has long been fascinated by cycling and began racing in local, regional and national races during the late 1980s.

"I really enjoyed the freedom it allowed," Walter said, explaining how cycling allowed him to experience the world in a different way. "So often in a car ... it's about getting from Point A to Point B."

In 1991, he moved to Wooster and started his career with the fire department, all the while riding his bike.

Married and settled, Walter said he and his wife, Christi, decided to start a family and wanted to find a way to increase their income so one of them could stay home with the children. With this, Walter said, the seed of Groovy Cycleworks was planted.

"We were pretty disappointed with the tandem we were riding," Walter said, explaining how it was not strong enough to take the beating of the surfaces they were riding. Itching to ride something beefier, he described how he and his wife developed a design for a tougher tandem and had Pennsylvania custom bike builder Bill Groves put it together.

"I became enamored by the whole process," Walter said.

Eventually convincing Groves to mentor him, he developed his fabrication skills and Groovy Cycleworks started rolling. Over the years, he has honed his skills and grown quite the following in the national and international cycling community. While Walter estimates only five of six of his bikes are in Ohio, his custom bicycles can be found in 28 countries.

Walter said his time is been split between the fire department, Groovy Cycleworks and his family, which eventually grew to include son Kalten and daughter Emily.

Despite how busy the bike-smith, firefighter and family man may be, Wooster Fire Chief Roger Brenneman said Walter does not show it at work.

"He is very good about keeping his two lives separate," he said.

As the department's EMS captain, Brenneman said Walter works at making sure everyone is property trained and prepared to jump into action.SFlb"He is very dedicated ... anybody will tell you that," Brenneman said. "He is meticulous about doing things correctly. That's why people like his bikes so much."

Cary Wenger of Wooster said he likes his Groovy Cycleworks bicycle he won in a raffle after a local mountain bike race. He said his mountain bike, painted with military grade ceramic paint, is "just right for me."

One time, he said he got on the bike after taking a season off and likened the experience to coming home to a home-cooked meal.

"It felt like a warm bowl of macaroni and cheese," Wenger said. The attention to details like fit and handling, he said, is what makes his bicycle special.

With bicycles ranging in prices and even going up to $12,000, Walter said paying attention to detail is important.

Wenger said riders who purchase a bicycle from Walter usually are experienced cyclists and know exactly what they want. Walter said he does not mind putting the long hours into making the bicycles perfect.

"There is no room for error," Walter said.

He said he has not been alone in his pursuit of crafting the perfect custom bike as each family member contributes to the cause.

"It's an interesting dynamic," Walter said.

He said it has allowed them to work together, spend time together and always have a parent around. While his kids are involved in the production of the bikes, he said for a long time they did not realize how far his bicycles have reached.

"It never really hits home to my kids until I go to a show like the North American Hand Built Bike Show."

Hobby: Cycling has shared time with rock/ice climbing and whitewater kayaking, but as I get older, all have slowly taken a back seat to a hobby that brings me back to carefree childhood days of simply enjoying action and imagination; playing pinball.

Favorite food: Though not born here, Wooster has served as my home longer than any other place. It would not be "home" without Coccia House pizza and Hartzler's Chocolate milk.

Favorite place to visit: Whether on the rock or in the water, no place allows me to feel as serene and one with the world as the New River Gorge in West Virginia.

My pet peeve is: Mediocrity

Who's tunes are playing: In the CD carousel right now is Morphine, The Crystal Method, Southern Culture on the Skids, DJ Format, Henry Rollins, and Cake.

The talent or Superpower I wish I had: The ability to turn back time and work less, spending more time with my kids as they grew.

Least favorite chore: Working on old, rusty vehicles...but with two 1992 Volvos on the road, this chore never seems to end.

First Job: I began working as a custodian/janitor for a day care at the age of 12, three evenings a week. That job ingrained a doctrine of responsibility and the need to be accountable to not only my employer, but to my own expectations of success. Can't say I cared much for cleaning toilets used by pre-schoolers all day long, that was a bit messy.

Nobody knows I: often struggle with feelings of failure, as I continually battle with finding time for everything I've committed to.

Who, living or dead, would you most like to have dinner with: My grandfather passed away while I was still very young, but left behind a legacy of self expression though his hand crafted work; paintings, handmade furniture, and self designed and fabricated tooling. Although I have glimpses of who he was through these objects, I would like to opportunity to get to know him as an individual, as I feel much of who I am has been derived from the person I believe him to be.

I hate to ask because I know how busy you are and I know you aren't taking repairs in anymore, but can you maybe take a quick look at Karen's B-side... I knocked over an unused lally column I had in the basement and it dinged the drive side chainstay. No cracks as far as I can tell, but kind of a deep dent. It's certainly not a high end frame, but Karen is kind of attached to it (she named it).

He's right, I am busy and don't do repairs for folks anymore, but since he was in a bad way after crunching his wife's bike and is local, I made an exception.  Gave up riding with my daughter tonight, but got it done. 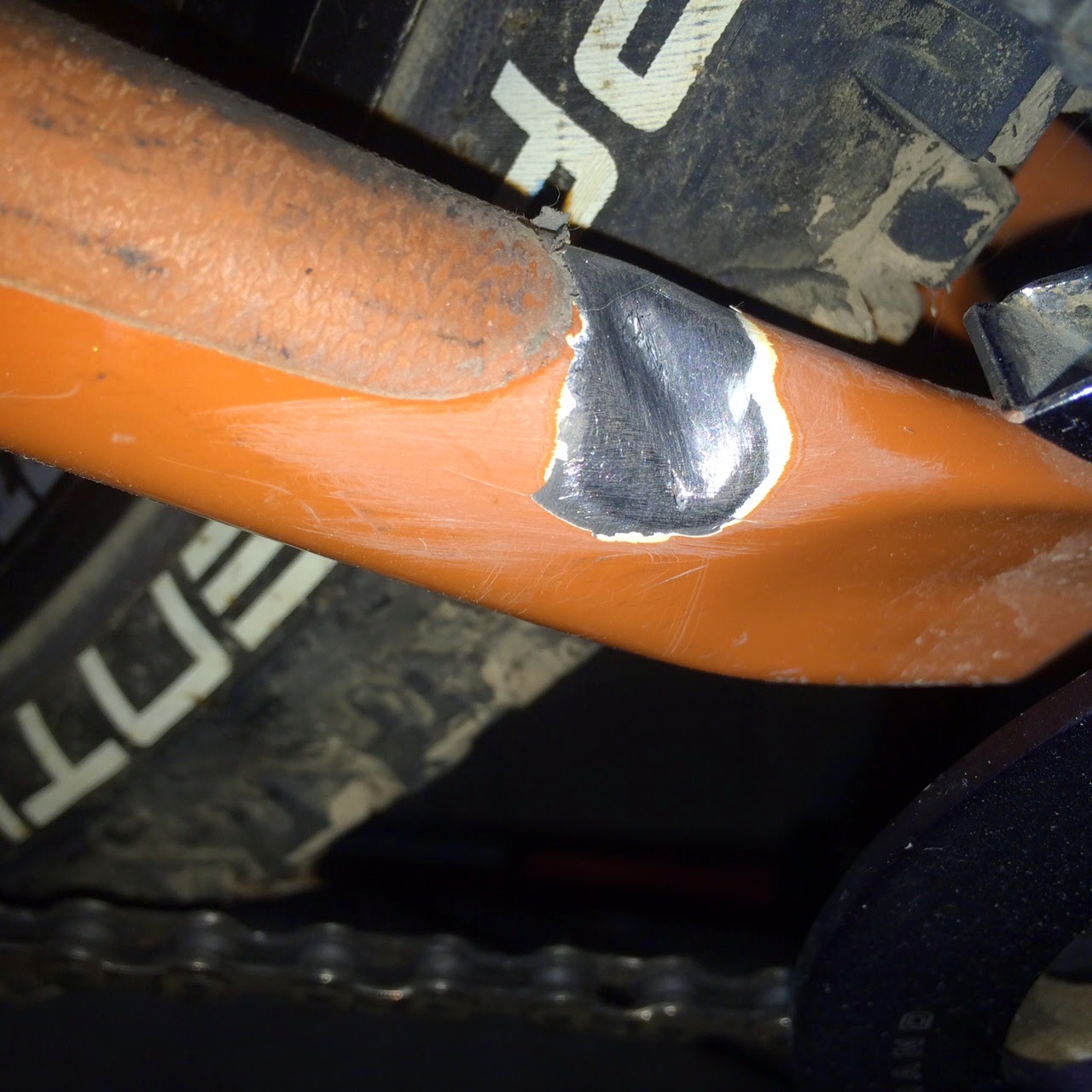 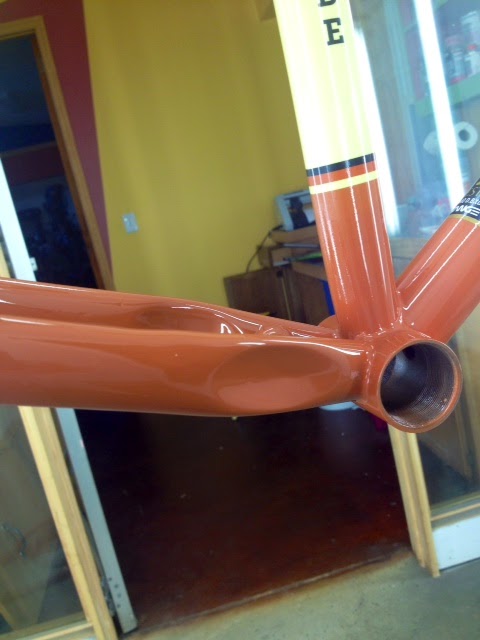 Paint was removed three inches to either side of the dent so I would not have to breath that stuff when the stay heated up.  I had to drill the crease out at both ends using a center drill, then methodically fill the gaping dent using the tig torch and two sticks of stainless filler (used because it flow/feathers out).  The area was then filed smooth and a bit of 45% silver was flowed into the uneven areas and sanded.

The paint edges were then sanded for a seamless transition and then primer, color, and clear feathered on to match the existing paint.

Hope Karen is happy with her frame and Michael is out of the dog house :)